Lessons From The Blueprint – Upper Body

This post relates to my Blueprint for running, which is free to download here – from my other site, The Confident Runner.

By the time you read this email, you’ll be much more aware of the sound that you make as you run, as you learned in the last lesson.

In this lesson, we are going to continue through the self-assessment sheet from the Blueprint so you can get the most out of it. The next area you are going to become aware of is your upper body.

I had thought about splitting each section into separate lessons, but I decided to put everything here. And there’s a good reason for that.

I rarely teach the correction of arm swing in isolation. In fact, it’s often the last thing I’ll do. This is totally against what I was taught as a England Athletics Coach, but the reason is actually very simple:

You run with your lower body and shape with your upper body.

If your arm swing is all over the place, or different from one side to the other (very common by the way), then there is likely to be something going on with your lower body that’s causing this.

Upper body movements can tell me a lot about how your brain and nervous system are integrating and coordinating with your muscles. During the running assessments I do, I observe very closely what’s going on with the upper body. So it’s important to have an awareness of what’s going on, even if you don’t need to address it directly just yet.

OK, so let’s first look at elbow motion. If you look at video clips of good runners, you’ll notice that their arms are held between 90 degrees and 45 degrees, and remain mostly in that position during the entire arm swing – both backwards and forwards. They lead backwards with their elbows, because as odd as it may seem, driving your arms backwards actually drives your body forwards.

When you look at your own running, do so from a number of different angles. Become aware of how you hold your arms when you run. I often see runners who have one arm that has the elbow sticking out to the side, a bit like they are stirring a pot of soup. This was me, by the way, only a couple of years ago and I still do it if I’m having an uncoordinated lower body day. So that’s elbows:

Don’t try to correct this yet, just become aware of it.

Next is shoulder flexion/extension. Many people get really confused about which is which, or even what the most efficient movement is for running.

A large number of the runners I see both professionally and just out and about, don’t have good shoulder flexion and extension when running. In fact, most of them hardly have any at all.

Instead, they get arm swing from rotating their upper back – this is the rotation box on the assessment form in the upper body section.

Rotating from the upper back is not only inefficient in that there is a lot of energy wastage with all that unharnessed movement, but it can lead to painful, stiff shoulders, painful, stiff upper back and an unbalanced running style.

Look at the videos of you running, and start to notice how much upper back rotation you have when you run. Can you start to tie this into any of the aches and pains that you feel, or a feeling of being unbalanced on your feet as you run?

Spend the next few days feeling these three things so you become aware of them:

All three of these are closely linked, and you may only be able to determine each by getting some video of you running.

Remember, becoming aware of how you run is the second step in the Blueprint and is essential to improving your running.

In the next lesson we’ll start looking at how your mid-section moves.

Until then, keep running, keep smiling and continue to become aware of how you move and how you run.

Unleash your hips is my online course designed to help you get those flying feet through better hip and pelvis mobility and improved running technique. Click Here to find out more. 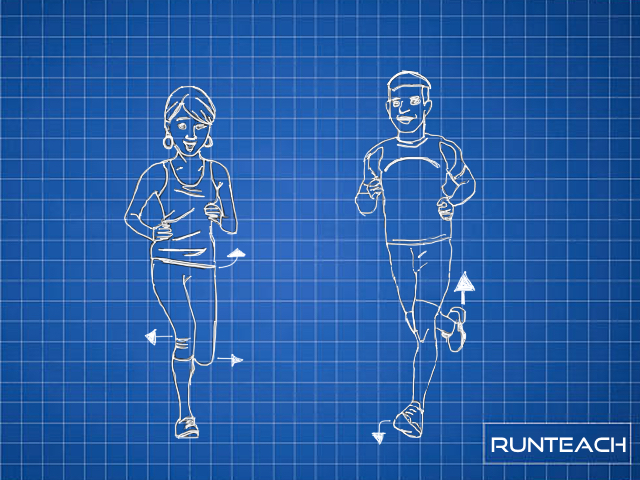